HISTORY OF THE BIRMINGHAMS 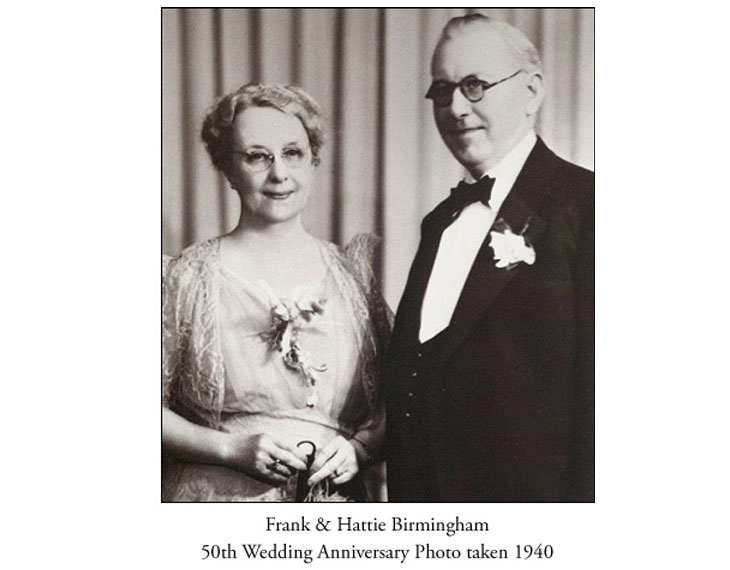 History of the Birminghams

Thomas Frank Birmingham was born in Bebee, Arkansas in 1869. After moving to Uvalde, Texas for his dad to practice medicine, Frank went on to college after finishing high school. Frank started his adult life at the age of 20 after graduating from Baylor University in 1889. Though his father wanted him to be a doctor like he was, Frank wanted to be a business man. Later in life though, he would receive a doctorate (PHD) from John Brown University.

After moving to Wylie for a job, Frank started a courtship with Hattie Housewright which would later prove itself in marriage in 1890. Shortly thereafter, the union produced a son, Franklin Ovid Birmingham. Wanting his son to learn the oil business from the ground up, Ovid traveled to West Texas to work in the oil fields in 1911. Unfortunately he died in October of that year while looking after his parents interest of the 99 Pumping Company in Electra, Texas. Typhoid Fever was the official cause of death. Ovid's body was prepared for burial and shipped via train back to Wylie where he is buried in the Wylie Cemetery. Ovid's bride had a hard year that year. She graduated high school, got married, became a widow, and became a mother to Lucile Birmingham. After a long and productive life, Lucile Birmingham Melcher passed away in Houston, Texas in 2006.

During Mr. Birmingham's life he made many generous contributions to the Wylie Independent School District (WISD). First, he was one of the leaders who founded the tax district that created WISD in 1901. He funded the construction of our first high school; he created a land trust in memory of his son and funded it twice; he donated a manual arts building and created a memorial scholarship in honor of his late sister, Pearl Birmingham. Additionally, he had printed and put up in each classroom, copies of the Declaration of Independence and the U.S. Constitution. For all of his generosity, all he asked was that students who benefited from these programs at the high school place flowers on his son's grave each year.

Wylie was not the only place that this kind philanthropist impacted. He founded a Boys Home, and supported other schools, churches, and civic organizations. In 1918 when two boys were found sleeping in trash bins, Mr. Birmingham founded what has become The Tulsa Boys Home. One-hundred and thirty troubled boys were helped within the next two years and the school thrives to this day.

In 1954, after 61 years of marriage, things would change. At the age of 85 with Hattie by his side in their home in Tulsa, Frank died; she would follow him four years later.

© F.O. Birmingham Trust - All Rights Reserved.
Back to Top